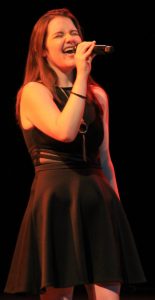 Katelyn Dietz is a multi-genre professional vocalist, currently based in Los Angeles, California. She is a member of prestigious ensembles Tonality (LA) and the brand-new LORICA, part of the ANÚNA choral family. A versatile vocalist, Katelyn has trained extensively in vocal jazz, pop, classical/choral, musical theatre, and Irish traditional folk song, and comfortably sings all treble voice parts. She is also an accomplished copyist and arranger, with her own sheet music editing service, The Transpository.

Katelyn recently finished her Master’s of Music in Vocal Jazz Performance at Western Michigan University, studying under Greg Jasperse. There, she served as the Graduate Teaching Assistant for the Vocal Jazz department and the world-renowned Gold Company program. Katelyn received three 2021 Downbeat Student Music Awards for Graduate College Blues/Pop/Rock Soloist, Vocal Jazz Arrangement, and Large Vocal Jazz Ensemble (as a member of Gold Company). Before in-person opportunities were affected by the pandemic, she performed with Gold Company at the Jazz Education Network Conference in New Orleans, LA, and served as the Head Music Producer for GC42: Love Is…, and published two of her arrangements in the show. Katelyn further serves the WMU School of Music community as the Camp Manager for the New York Voices Vocal Jazz Camp and as a counselor for Seminar, and also performed with University Chorale under the direction of Dr. Kimberly Dunn-Adams.

As a freshman at Fredonia, Katelyn organized a vocal jazz octet at the request of Bruce Johnstone, then-Director of Jazz Studies, to perform with Matt Catingub as he guest-conducted the Buffalo Philharmonic Orchestra. The Fredonia Voices (inspired by New York Voices) would be praised for their stand-out debut feature, The Buffalo News noting “amazingly, this was reportedly their first public performance. They were terrific – smooth, suave and tight.” The Fredonia Voices performed twice with the Cleveland Jazz Orchestra in Cleveland and Fredonia, returned to the BPO with Matt Catingub, and headlined alongside their namesake, New York Voices, in 2017.

Katelyn spends the holiday seasons caroling with The Other Reindeer and TCE Carolers and the summers as Associate Music Director and in-house a cappella arranger for Rochester Broadway Theatre League’s musical theatre bootcamp, Summer Stars, and Musical Theatre Mayhem, alongside numerous Broadway veterans and under the artistic direction of Nikki Snelson. In 2016, Katelyn spent five months studying Irish Traditional Song at the Irish World Academy of Music and Dance, and attended the Inishowen Song & Ballad Seminar for two years. While studying alongside the Academy’s Voice and Dance majors, Katelyn was a featured soloist in their Gospel, Chant, and Musical Theatre Ensembles, and has been called a “vocal chameleon” by retired Fredonia Director of Choral Activities, Dr. Donald Lang.